The hospitality of sweet mint tea is the greeting for every visitor in Susiya.

Susiya is a village of around 320 people, scattered on a couple hillsides in the South Hebron Hills.

Half of the people living there are children.  They love the simple things: helping with the sheep, playing with puppies.

And they love school. They recently celebrated the completion of a roof for their primary school, and applied some decorative paint, just in time, sadly, to see the demolition order Israelis have given them against it.

Flags wave at a childrens' demonstration against their school's demolition order.

The children are aware of the order against the school, but perhaps they are not aware that the entire village is now in danger of demolition: homes, livestock enclosures, cisterns, toilets, clinic, even the cave, where the women of Susiya’s Embroidery Cooperative maintain a hopeful little shop with a few handmade dresses, coin purses, and woven mats. 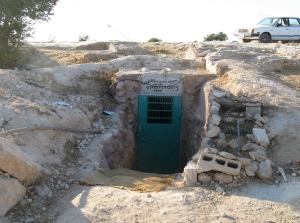 Susiya village has had a tragic recent history. Its residents have lived in this immediate area for generations.  In the 1980s, the villagers were expelled from their traditional cave dwellings when the Israeli government declared that land, containing an archaeological site, to be a national park.  After being forceably moved again several times, they came back to the agricultural land belonging to them just a kilometer or two from the original cave dwellings and park, in the 1990s and have been living here in tents, suffering from settler harassment from nearby illegal Israeli settlers ever since.  Now  they are in danger of more systematic violence against them as their entire existence on the land is threatened.

Here is an urgent action appeal I received from our office yesterday. Many thanks to Nader Hanna, our advocacy officer, for putting this together.  At the end there are ways you can take action to make this demolition less likely by raising your voice.

Generations of Palestinians have lived the village of Susiya in the South Hebron Hills. Yet, this village, sandwiched between Israeli settlements, has been consistently denied building permits, basic infrastructure and has always faced a constant threat of demolition, as it is unrecognized by the Israeli Civil Administration (ICA).

Recently, a right-wing organization named Regavim, submitted a counter-petition to the HCJ, requesting that all “illegal outposts” in the Palestinian village of Susiya be destroyed by the ICA immediately. This petition, HCJ Case 1556/12, comes on the backdrop of various demolition orders that were unfairly issued against structures in Susiya over the years, but were never executed.  Needless to say, this petition denies the many protections afforded to Susiya residents under international law.

As a result of Regavim’s petition, there exists a real and immediate danger that 30 homes and 42 other structures, including Susiya’s school, health center and cultural center will be demolished momentarily. If Regavim’s petition is successful, it would displace all 320 residents of Susiya, 150 of whom are children, and set a precedent for other Palestinian villages in the South Hebron Hills & Area C, which is 62% of the West Bank.

Regavim is an Israeli NGO that presents itself as “a social movement that aims to prevent illegal takeover of national lands by certain bodies”. However, its own publicized record reveals that it recognizes the oPt, Golan Heights, and parts of Jordan as part of Israel, and its main objectives are to: 1. Lobby the Government of Israel to destroy Palestinian structures, whether in the West Bank or in Israel; 2. Identify and suggest to the government new opportunities for such demolitions, and 3. Stop demolitions and evictions of unauthorized Israeli-settler structures in the West Bank.

Article 23 of The Hague Convention of 1907 clearly states that, “it is especially forbidden (for the occupier) to destroy or seize the enemy’s property, unless such destruction or seizure be imperatively demanded by the necessities of war.”

Article 53 of the Fourth Geneva Convention of 1949 states, “Any destruction by the Occupying Power of real or personal property belonging individually or collectively to private persons, or to the State, or to other public authorities, or to social or cooperative organizations, is prohibited, except where such destruction is rendered absolutely necessary by military operations.”

We encourage you to:

o   Your Ambassador and/or Consul General in Israel

o   The Israeli Ambassador in your country

You may either use the sample letter below or draft your own:

I urgently call upon you to rescind all demolition orders that were issued by the Israeli Civil Administration to the village of Susiya, in the South Hebron Hills, which consists of 72 structures in total. For many years, the 320 inhabitants of this village, half of whom are children have faced severe repression by Israeli soldiers and settlers, and repeated destruction of homes and infrastructure.

I call upon you to support the pending petition, HCJ Case 5825/10 submitted by Rabbis for Human Rights on behalf of the people of Sisiya, and to dismiss Regavim’s counter-petition, HCJ Case 1556/12, which calls for the destruction of this village. Regavim’s petition is a violation of Article 23 of The Hague Convention of 1907 and Article 53 of the Fourth Geneva Convention of 1949, and denies the many protections afforded to the people of Susiya under international law.

The residents of Susiya have the right to live peacefully in their homes!