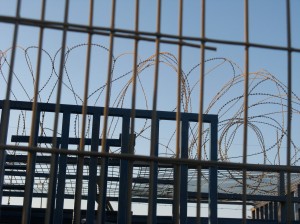 The top of the checkpoint cage

The men were anxious. They got out of their taxis at a run, desperate to get through the checkpoint before the morning rush.  It was 4:15 am. These men were not trying to catch a flight or to respond to a fire. Their motives were much simpler and more mundane. They were just trying to get to their jobs. To go to work.

Every day, checkpoints screen thousands of Palestinian men and women who need to go to jobs in Israel. They are going to all sorts of jobs, but at this time of year there is an increase in young men who are working in the various agricultural harvests, helping to gather oranges, olives and other produce as it comes ripe in the cool month before the winter rain.  Their short-term permits are related to this seasonal work.

On Sundays, the men who prefer to avoid the daily checkpoint screening go through once for the week, finding some temporary place to stay in Israel in the evenings. So Sunday mornings are usually busy.

Inside the checkpoint cage

Yesterday, the checkpoint was already full when we arrived at 4:10 am.  The line was barely moving.  Before 10 minutes had elapsed, I had to climb up onto a bench to be out of the way.  A mass of men was forming at the entrance to the checkpoint building, ten abreast and at least that deep. They were trying to go through a doorway one yard wide, to enter a warehouse-size metal shelter leading to a turnstyle that could be locked by a soldier at whim.  The men were pushing.  They had to get to work on time in order to keep their work and their permits.  The delay was inside, at the turnstyle, where only a few men at a time were being allowed to advance further, into a chute that led to a second locked turnstyle and then, finally, on to the security screening.

The screening was too slow.  Soon the men were literally jumping line. Climbing the walls, yelling and pounding the metal walls in frustration. The crush inside the building was so great that some men began to come out the entrance, deciding to give up rather than stay in the misery of the building. It became necessary for me to move away from the entrance altogether.  A few men formed a line along the fence and said their morning prayers, bowing their heads to the ground. In the parking lot, the vendors were doing a huge business in falafel sandwiches and coffee as many men stood around in frustration and anger.  The men were grateful when I began to do some photo documentation, repeating “work, work, work!” as I documented the situation.  It made them feel less alone to know someone was seeing their struggle. 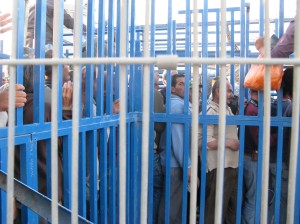 I made several calls to the humanitarian hotline and got no response.  Finally I called the International Red Crescent.  There had been targeted assassinations in Gaza by Israel the day before, I was told.  Now there were rockets being fired from Gaza. As a result, all the screening at the checkpoints was going to take a lot longer.  There wasn’t anything to be done, I was told.

The situation continued. Some men reported being in the metal shed, waiting for the security check, for over an hour. Some construction workers were turned away because they were carrying tools for construction work, tools like an electric hand saw that, today at least, would be considered too dangerous.

Pictures can show the crowding and the worried men, but they cannot show the helplessness I felt as a human rights observer, seeing these men act out their desperation to go and earn a living. A final call to the UN field officer yielded some results, and by the time I left at 7am, the line was beginning to move more normally.

“Why do you come here?’, checkpoint workers have asked me recently.  “Don’t you miss your families? Why come so far from home to stand here?”  Why indeed? To be here for the men. And to show you, the reader, what occupation looks like. 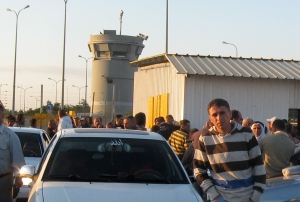 The look of not getting to work.

One thought on “Checkpoint”