Shuhada Street once was one of the main commercial streets for Palestinians in Hebron, but it has been closed by Israeli Occupation. The shops here have been unable to open for years, ending the incomes of the merchants who live over these shops.

The number of checkpoints on this street alone is ridiculous.  There is a slow and steady attempted encroachment of settlements in this area of Hebron, as house after house has been occupied by Israelis.  There’s even an illegal tent synagogue, an outpost of Khiryat Arba, on Palestinian land. 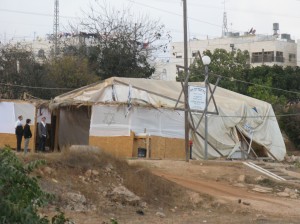 An illegal settlement outpost, this tent synagogue is established in a Palestinian neighborhood in the West Bank on Palestininan land.

There’s an illegal settlement next to Hebron called Khiryat Arba.  On Fridays, these settlers come into Hebron to pray at the Synagogue which is attached to the Ibrahimi Mosque.  Because the settlers walk through Palestinian streets that are under occupation, on Fridays the streets are heavily militarized.  There are soldiers stationed all along the streets where the Israelis walk on their way to prayer, every 100 meters or so, and heavily armored vehicles also patrol here.

Walking along these streets this evening, we EAs greeted people along the way.  To the Palestinians we said, “Massah al Khair” and “Salaam Aleichum”. To the soldiers, we said, “Shabbat Shalom.”   Although most of the soldiers smiled and responded, one settler couple, an elderly man and his wife, hissed at me in disgust when I offered my greeting. It is the first time that a sincere greeting of “Sabbath Peace” from me has been thought to be provocative.  Apparently my presence as a peace activist in Hebron sent an unwelcome message.  For those who want to take over more of Hebron, the presence of internationals is often unwelcome.

As darkness set in, we encountered a horse and cart that had been stopped behind a barricade while some Israelis passed.  Eventually the cart, with children riding in the back, was allowed to pass.  As we walked, we saw that the cart had been stopped by some soldiers, but this was a peaceful encounter. The soldier was petting the horse as we arrived, and some friendly banter was going on.

As the cart moved on, one of the children pointed his stick at the soldier, pretending to hold a gun, and shouted, “Jesh, Jesh!”, which means “soldier, soldier!”.  The soldier pointed at him and laughed.  It was a pleasant cross-cultural exchange…