Hajji Haliim, a woman of advanced age, walks with her back slightly stooped, but as she arrived and greeted each of us, we felt her serene dignity. I felt a warmth in her presence as I listened to her story. Haliim has seen many changes. She remembers a time when the land grew wheat for bread and grass for the sheep. She remembers when the rains were good and, on the farm, “for the house we didn’t buy anything.”  The land provided everything that was needed.

In those days, her husband could ride a donkey from this place and the city of Beersheva to work, and then come home. But now, she says, Israel has the Green Line, which we can see from our seats in her tent in her little village of Khirbet Al Fawqa.  Now the Israelis close the road. Now the Palestinians have no work, and the young men just sit in the tent, since many cannot get permits to go to work at all. In these conditions, income is primarily generated from the sale of assets, primarily sheep.

Haliim remembers when she was a young woman in her early 20s.  She remembers when the land was under Jordanian control, how people lived together peacefully, without land theft.  She remembers a time in 1948 when the Haganah, the Jewish militias, came.  She remembers when Israelis killed a lot of Jordanians here.  She mentions this as a fact, without elaboration, and I want her to tell me more about those times, but what she really wants to say is about what is happening now.

Now the land is dry, dry. There is not enough food on the land, she says with evident concern, to fill the stomachs of the sheep.  There isn’t enough water for the people, either. It costs 100 shekels to buy 10 cubic meters of water to be brought in by truck.  “We don’t have 100 skekels per tank,” she says, and if you complain, you are told, “If you do not pay, let God give you water.”   God does provide, she says, but the people who have the water don’t give it. She knows that many international organizations are aware of the problems here, but in the village the people do not receive much.

It’s easy to understand Hajji Haliim’s bitterness.  Usually one conceives of the Green Line as a line on a map, but on the ground there is no indication where it really is. Down the valley from the tent, we clearly see the Green Line because on the other side of it there is a forest.  It is actually green, a rare and refreshing sight in this land of drought and dust.  How can it be green so close to us?  On the other side of the Green Line, the Israeli side, there is the water. Looking at the contrast makes my heart very sad.

From the tent, EA Jasmine looks at the Green Line and the stark contrast in water access between the West Bank and Israel.

In the nearby village of Wadi Al Amayer, the concerns about water are also much on the minds of the people.  In this village, fodder for the animals is again a major concern.  The owner will ask for help from Oxfam.  Equally pressing is the need for more access to water.  There are no springs or wells here. The village has only one cistern to store water. 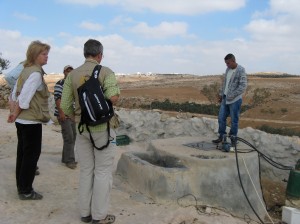 EAs look at the village cistern as locals share concerns about water insecurity.

It takes over two hours to go and bring water every two weeks by truck to refill the cistern.  But the people say the water the single cistern can hold is not enough for the six families and numerous animals that live here.

Trucking water into villages is made more complex by the many earth mounds and other road blocks that obstruct traffic.  These earth mounds are created by Army bulldozers, even though the land belongs to the West Bank, which is Palestinian.  This is the Occupation at work.  From our vantage point, we could actually watch the Army constructing such a barrier.  These barriers are regularly put up by the Army and then, just as regularly, they disappear and reappear, here or somewhere else.  The bulldozers seemingly never rest.  The result is that Palestinians, who rely on these poor, secondary dirt roads can never be certain which routes will be open.  We also observed a water truck today that was apparently stuck in an earth mound barrier.

The water truck is stuck in an earth mound placed by the Israeli Army in Area C.

As we entered one of the villages, we were stopped by the Army.  Three soldiers with rifles got out of their hummer and came over to see us.  They asked our driver for his permit.  After an inspection of the car, lasting about 10 minutes, we were allowed to proceed. I felt angry and tense about this unnecessary intimidation.

As we walked up to the village, our driver told us what had happened as the soldiers looked at his permit. “You don’t have a permit to drive in Israel,” they said.  “I don’t need a permit here,” our driver replied.  “This isn’t Israel, it’s Area C.”