Asalaam Aleichem, inshallah.  Peace be with you, as God wills.  Indeed, God wills peace for God’s people, it is true.  There is the inner peace that God gives. And there is the peace of the desert when all is calm; this is a deep, visceral, soul-stirring quiet.  May you come to know both these kinds of peace.

Everyday peace…now that’s another matter.  It seems that in Khirbet Arba, last week, maybe a stone was thrown at a car driven by a 24 year old Israeli man who had a young child with him.  In any case, he lost control of his vehicle and both were killed, and three stones were found in the car.  One of them seems to have come through the windshield and the other two may have entered the car during the accident.  At first it was hard to say, from the news report, exactly what happened. Now Haaretz has concluded, without complete forensic evidence as yet, that indeed, a stone seems to have been thrown. 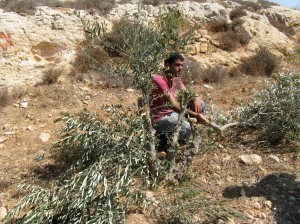 Farmer taking stock of the death of his trees.

I saw the owners looking forlorn and angry, because the olive tree, the shajara zatoun, is a friend that bears fruit for centuries.  These trees, about 12 years old, had their whole lives ahead of them, as did the man who died in the car crash and his son. 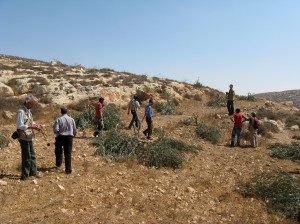 In both cases, dear friends were lost. Both events are grievous, and essentially beyond our ability to take in. But what connects these two terrible events? In the orchard there was graffiti sprayed in red upon the rocks, and our translator of this event has told us that the writing says this is a “payback” for the event of the stone and the car.  Payback is a sort of lawless law, vigilante law.  It’s the law of the strong against the weak.  It’s the kind of muscle flexing that happens when fear is in charge.

From visiting the farmer who lost his trees, our EAPPI team was scheduled to drive to a checkpoint to escort children home from school.  We tried. But we were prevented. Unfortunately, the Army had roadblocked all the secondary roads so that it was impossible to arrive in time from our starting point.  In this case, it was the official actions of the government —  ever so many — that wrecked havoc upon the everyday lives of the people.

How badly this place needs peace and justice. The situation is bad for everyone. God help us poor human beings and rescue us from ourselves. God rescue us from institutionalized injustices that drive us to despair and violence.  God rescue us, the earth and all its creatures, from the violence we inflict.