There are natural hazards here in the West Bank.  There’s the “deathstalker”, the pale yellow and green scorpion.  There’s the Palestinian Viper, who hisses and strikes quickly.  I’m told there are wolves.  And there’s the rock, everywhere the rock, easy to stumble upon, hard underfoot, under which the snake and scorpion can hide. This morning, in good humor, our driver presented us with a scorpion in a bottle. He had found it near our home.  We were duly impressed. Then he gave us a flint he found in the desert to take to our house. He hasn’t yet presented us with a wolf or a snake!

More insidious than these, however, are the human-made issues.  Yesterday we accompanied 12 school children home after school to Beit Yatir checkpoint.  Those of you have children may recall the anxiety the first day your children were old enough to go to school alone.  Maybe you waved as you put them on the bus or let them walk to school, trusting they would look both ways before crossing the street. How about if your young child had to go through a military checkpoint and go through x ray scanning on the way back from school, and then walk past a community guarded by civilians with high powered rifles and a reputation for harassment?  What if it were only safe for your children to go to school if internationals came to walk with them?

EAs Jan and Matti walking children home at the checkpoint.

For these children, daily irradiation and walking past soldiers with big guns is the price of a primary school education.  Sadly, because they are isolated in the Seam Zone between the Green Line and the checkpoint,  school time and the time they spend with international accompaniers is all the social interaction outside the home that they get.

In another community in Palestine, children from the village of Tuba must walk between an illegal Israeli settlement and its illegal outpost to go to the neighboring primary school in ATawani. This is roughly a 20 minute walk. In the past, they have experienced such threatening harassment that the Knesset has legislated a daily military escort for the children.  Even so, this escort sometimes does not come, or does not guard the children, leaving a large space between the military vehicle and the children, and settlers have threatened them despite the presence of the military.  Internationals are not permitted to walk with the children for fear that this would be seen as provocative by the illegal settlers.  So instead of walking with the children, internationals position themselves visibly on nearby hillsides to watch through binoculars as the children walk and to note the license plate of the military escort.  If the military escort does not come, these internationals then join the children and take them overland by a longer route, which is still not entirely safe and takes about 40 minutes. Before this international presence was set up, the children had to walk a very long overland route to school, a two hour walk one way.  Since the international escort, the number of children daring to go to school has increased from just a couple to around 15.  To learn more about this,  see the Christian Peacemaker Teams/Operation Dove report, “The Dangerous Road to Education”, available to download here:

Today we visited the Bedouin village of Dkaika.  To get there we drove for an hour into a desert-like environment. The village has been in existence for many generations.  It consists of semi-permanent tents providing shelter for 350 people and their livestock: sheep, donkeys and a few camels.  The village has no electricity, and water is trucked in from 7 kilometers away and deposited in a cistern.  Lighting is provided by propane lamps.  There is a school for 60 children in this village, from grades 1 to 6.  After 6thgrade, they must walk a great distance in the desert if they wish to continue their schooling. The village is located in an area that is designated Area C and is under complete Israeli control.  It lies between two parts of Area C that Israel has designated as Military Zones. In order to understand this, it is necessary to know that all of Area C is within the West Bank and is Palestinian land inside the Green Line. The Israeli Civil Authority has demolished one classroom 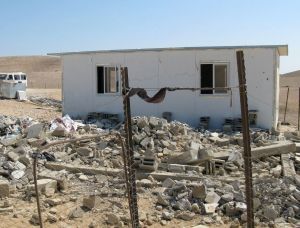 and severely damaged two more, which have been rehabilitated recently with the help of Unicef and Islamic Relief.  Unicef is helping the school to obtain solar power. Although the rehabilitated classrooms will be available for students to use in just a couple days, demolition orders against them remain in place.

The plan of the Israeli Civil Authority is to relocate the Bedouin population of Dkaika against their will, which is illegal in international law.  This plan to relocate people living in a traditional manner in small villages in Area C has been stated officially by the government as reported in Haaretz. See the following link:

Regarding the fate of Dkaika, Rabbis for Human Rights has written,

“In the framework of our last appeal, the State made forcefully clear its intention to erase the village of Dqeiqa. Even if a plan is submitted, according to the State, there is a very slim chance that it will be approved. The declaration that the village residents will be transferred to nearby Bedouin sites was heard again. The village is recognized by the Palestinian Authority as an independent village. In the village there is a school, a mosque and a cemetery from the Ottoman period, but who are we to challenge the army, which has decided that Dqeiqa can not provide for it self as a social and geographical entity?”  To read more see this link:

Under international law, an occupying power has a responsibility to care for the population and does not have the right to relocate the people against their will, nor to place its own population in the occupied territory.  The responsibility of care for children does not involve frightening them on the way to school, or demolishing classrooms.  Nor does it involve forcably uprooting them from their homes.  These are human rights violations, which must be seen by the world and hopefully corrected. Feel free to forward this note widely.

One thought on “About snakes, scorpions, rocks and wolves”