Two days ago now, we walked around Yatta.  The locals speak about as much English as I do Arabic. And in Yatta itself, the people rarely see internationals.  So as the 5 of us walked through the streets to the souk (main street) we created a sort of parade.  It was the Muslim Sabbath and so there was no school.  Therefore, we collected about 20 kids walking and riding bikes, all of whom wanted to show off their three English phrases.  We gave away a lot of brochures about EAPPI to both children and adults and engaged a shop keeper in conversation about why we are here.

That afternoon, we went to three small villages near the southernmost tip of the West Bank.  In one village the people were deeply upset by the military’s placement,the night before, of an earth mound at the point where the village road meets the pavement.  The villagers expressed fears because, with the earth mound in place, they can not quickly leave the village if they need medical care.  Only their old truck might be able to cross the deep and imposing earth mound.  Already, however, the children have been going overland to school, taking a 6 kilometer walk (one way) each day.  This is because when they walk on the paved road, which is a much shorter route, they are harassed by the military because they are Palestinian. The overland route will be muddy and slippery when rains come in a couple months.

While we were visiting with the family, a convoy of eight military vehicles came north into the West Bank from Israel.  We wondered where they were headed. That is the nature of occupation; the occupying army can come into one’s land and do what they want.

In our next village, the military had erected an earth mound at the edge of their property also.  The villagers reported having tried to remove the earth mound, and one of them was arrested for this and held in detention for an hour for trying to remove it.  No reason was given for the erection of these closures.

In our third village, we found that one week ago the military had come and taken out the electrical poles and wires coming into their village.  The people have coped by running a generator at night for lights for two hours.  Cooking is largely by fire, but now there is no refrigeration and no way to charge or use electrical appliances, which greatly reduces the ability to communicate. 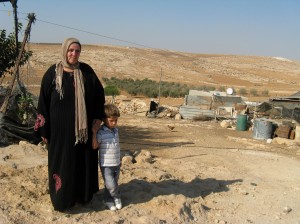 Little Ibrahim cannot walk on the road to go to school because he is Palestinian. This is not permitted by the military.

Ecumenical Accompaniers examine the remains of the electrical service to a village after the service was destroyed by the military.

The effect of these measures has been to intentionally isolate and add stress to the lives of the Palestinian people living in the far south of the West Bank.  It’s important to note that, in addition to the settler violence I have reported earlier, these policies of isolating the Palestinian people are being systematically put into place by the military.   These are simple people.  Their resistance to the occupation is simple: they insist on living on their land, which they own.  Every day that they stay in their own homes is a day of resistance.