Good evening!  I learned this morning that a student here was forceably detained, blindfolded, handcuffed and taken in a jeep to Gaza this week.  She had listed her permanent residence as Gaza in 2005 when she came to Bethlehem to study.  This is the same thing our children do when they go away to college.  That seems to have been her only offense. She had two months left before graduation.  So I spent an hour writing letters to congressmen about this today.

Then I walked about 20 minutes from my flat to join my husband’s Sabeel Witness Visit group tour of Aida Refugee Camp. We had about an hour and a half orientation and then a tour of the camp itself.

Aida Refugee Camp is one of several such camps in Bethlehem region.  5000 people live there in a tiny space. Some of these people fled from the Israeli army in 1947 to this place, where they lived in tents for a few years until the UN refugee agency gave them concrete to build simple dwellings.  These people were given identity cards and it was suggested that since they were registered refugees, if they stayed there they might someday be able to return to their homes.  Now their children and grandchildren also live in the camp.  It’s not a prison.  They are free to move to another part of West Bank. But land is outrageously expensive to buy, and building permits are nearly impossible to obtain, so they are unable to go anywhere.

Now some of the people are beginning to cover the walls with stone over the concrete.  This provides better protection from bullets.  A machine gun can shoot through concrete. This is no idle concern.  Aida is surrounded by the Wall and the gun turrets are manned.  Moreover,  soldiers train in Aida, learning how to subdue a neighborhood, how to storm through interior walls between homes, how to blow up doors.  We were told that it is not uncommon for soldiers to shoot idly down into the camp for no reason, or to drive very fast down the narrow streets.  Children have absolutely no playground or green space in Aida, so they congregate in the streets to play; this is not safe for them, but they have few other alternatives.

The schools operate in shifts, because they cannot accommodate all the children in one shift.  They teach only the basic subjects because they lack the resources to do anything like music or art. So the Lajee Community Center provides some of this kind of programming for the children, teaching skills and providing recreational outlets.  The children collect money from home to buy fans or heaters for the classrooms (there is no central heating in Palestine, and it can go into the low 40s at night in winter and get very hot in summer.  The thick stone walls of buildings provide some insulation.)

I could write so much more.

After the tour of the camp, I made a quick turn-around and went to Beit Sahour to a nice place for plein air painting where I met several of my students.  I think there were close to the 20 who came, tho many who live far away had to leave early.  It was a bit of a brain warp to go so quickly from the tour  to painting in an olive grove.  But we had a lovely afternoon and enjoyed the view and the opportunity it presented.

A bright spot was seeing Arnie, and this evening we went out and had a nice dinner.  We’ll see each other again because tomorrow I will go to Nativity with the group in the afternoon and then to a restaurant with Dabke dancing (Palestinian dancing) in the evening.  In the afternoon we are going to have a lecture on non-violent responses to occupation.  I’m looking forward to joining a worship service tomorrow to have hope renewed.  Never mind that it will be in Arabic. Holy Communion needs no translation.

I’ve had trouble selecting a picture for today.  You need to see them all.  That’s not possible.  So here is my pick. 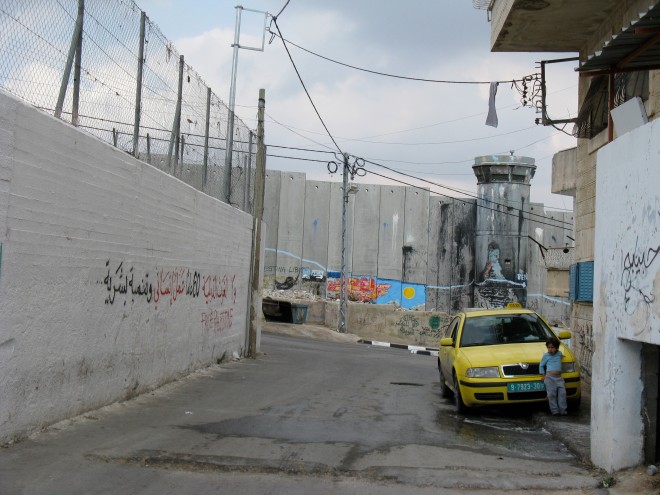